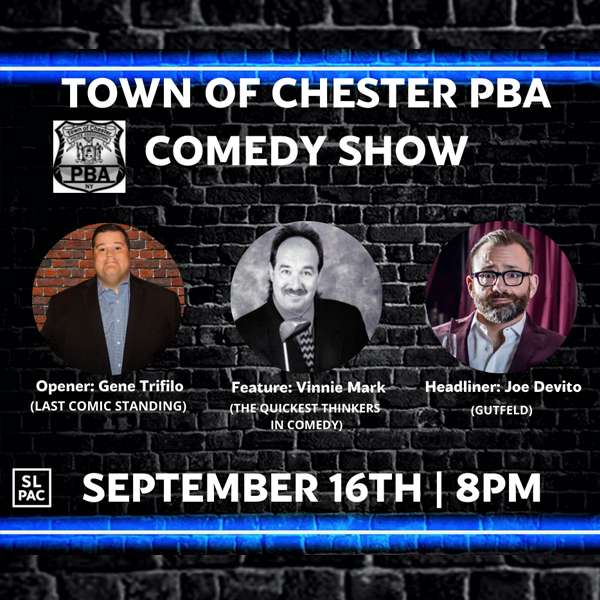 Come support the Town of Chester PBA at a fun-filled, humorous comedy show opening with “Crazy" Gene Trifilo, featuring Vinnie Mark, and leading up to their headliner, Joe DeVito!

Whether taking on relationships, his Italian-American family, or current events, Joe DeVito's dead-on timing, unexpected twists and sheer flights of lunacy make him a favorite at clubs and colleges across the USA, and at the top venues in New York City. After spending a decade as a journalist and advertising writer, Joe gave into his coworker's demands to try performing, so he could find fame, while they finally got some work done. Since then, he's appeared on television more than 150 times, including Comedy Central, The Late Late Show (CBS), Last Comic Standing (NBC), AXS-tv's Gotham Comedy Live, Comics Unleashed, E! Network, CNN, Animal Planet, Discovery Channel, and more. He's also been a regular panelist on FOX News Channel's Red Eye, Kennedy, and The Greg Gutfeld Show, discussing current events with a satirical bent.

“DeVito opened with a set that was as fast paced as it was funny. Extremely disobedient of the term “politically correct," he seems to have an endless pile of inappropriate one-liners in his head… yet deadpans all of this 100% with just the right amount of self-depreciation."

“Crazy" Gene Trifilo was born February 3rd, 1976 in Beacon, NY. He was delivered by a doctor that was missing fingers on his right hand. Gene has spent a lifetime entertaining crowds all over the United States, Canada, and even Europe. Gene was nominated class clown by his senior class in 1994, and shortly after, he began the impressive career that has led him to perform all over, including New York City, New Jersey, Las Vegas, the Hudson Valley, Denver, Detroit, Tampa, Miami, London, and Paris to name just a few. Gene can perform in front of any audience, including clubs, bars, dinner shows, corporate events, fundraisers, churches, and private functions.